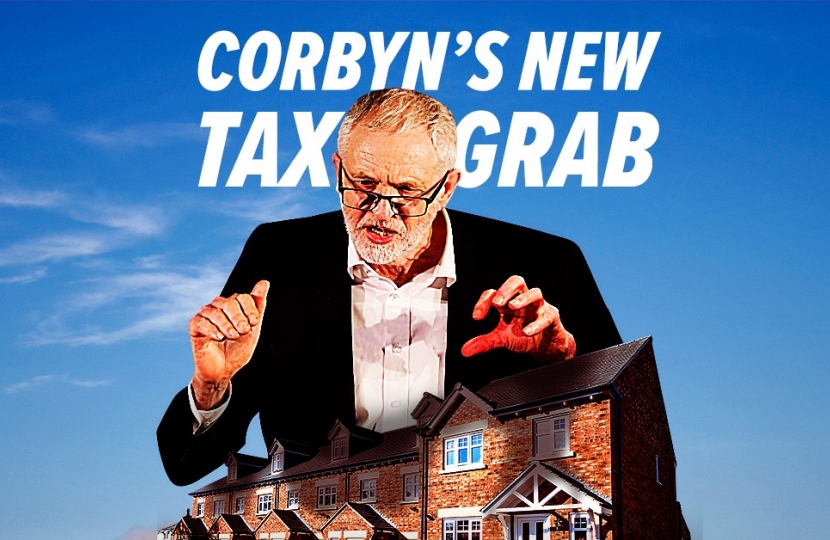 Labour want to tell you they’ve released a raft of housing policies to address rising land prices in the UK. What they don’t want you to know is their plans involve a new national ‘progressive property tax’ on every home. That tax will cost you on average £374 more in tax every year.

And what they really don’t want you to know is that family homes like those with gardens will pay even more under their new plans.

Read our article below for the precise plan of Labour’s tax raid, and how they want to fund their new housing policies.

Labour’s policy document calls to implement a ‘progressive property tax’ – a new homes tax based on house prices. Labour’s plan is to send you an annual tax bill based on the value of your house, with homeowners charged more if they invested more into their home.

Not only does Corbyn’s Labour want to levy a new tax on your home. He wants to spend more energy prying into where you live. Labour wants regularly updated property values, with rates “set nationally, rather than locally determined”. This means government tax inspectors, with snoopers inspecting your home and garden, to precisely evaluate the worth of your home – so Labour knows exactly how much they can exact from you.

Labour is clear that they will try to raise more tax revenue. Their own policy document says they want a tax that “could generate more revenue”. Make no mistake: this is a tax raid on middle England’s homes.

The current tax system intentionally does not tax home improvements until a house is sold. But Labour’s new tax would see those who save and work harder to improve their home punished by paying more in ‘progressive property tax’ every year.

The current system also provides a 25% discount for single person households, who make less use of local services. By contrast, Labour wants to scrap the single person discount, calling it an ‘inefficiency’ to tax people less. Their own policy disregards how the current system offers tax discounts for the disabled, carers, and granny annexes, calling these situations “overconsumption of housing”.

If you want to stop Labour coming into power and taxing your home, why not show your support and help us stop Labour’s homes tax?

Figures published this month show that Labour’s new tax will cost an average home £374 more every year in tax.

Over just a single five-year Parliament this would mean families having to find £1,870 extra just to stay in their home.

This excludes the undisclosed plans by Labour about how much more they will charge higher-valued homes.

How are the Conservatives ensuring I keep more of what I earn?

Take Bracknell Forest for example. The Conservative team have worked hard in council – and as a result, the local team made savings of £11.6 million without cutting a single service.

And we have been ruthlessly cutting income tax to save money for 32 million people. That means we have more money to invest in public services while letting you keep more of the money you earn.

But there is still more to do. If you want to stop Labour coming into power and taxing your home, why not show your support and help us stop Labour’s homes tax? Sign up to keep in touch about Conservative policy.

Today we have published our Covid-19 UK Vaccines Delivery Plan, setting out how we plan to deliver the biggest vaccination programme in British history, to protect all those who need it most as quickly as possible.