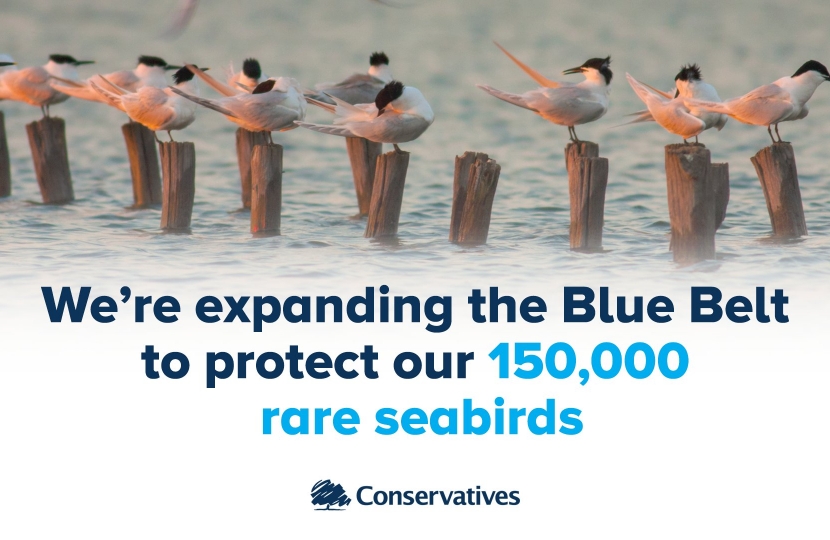 SUFFOLK COASTAL MP and Environment minister Thérèse Coffey today announced that nearly 150,000 rare seabirds – including the iconic little tern and black-throated diver – will be better protected as the UK’s ‘Blue Belt’ of marine protected areas extends by over 650 square miles.

A newly classified marine Special Protection Area (SPA) will come into force along a 24 mile stretch of coast from Falmouth Bay to St Austell Bay in Cornwall. The area – equivalent to almost 55,000 football pitches – is the UK’s most important site for the wintering black throated diver. This new protection will help to minimise disturbance to the feeding areas and marine habitats the birds rely on, providing a safe haven where they can spend the winter.

A further marine SPA has been announced in the Irish Sea between the Isle of Man and Anglesey – home to over 12,000 Manx shearwaters – while four other sites have been extended around the UK, ranging from Liverpool Bay in the north-west of England, Poole Harbour on the south coast, and the Outer Thames Estuary near London.

Marine SPAs are sites given special status to protect populations of rare, vulnerable and migratory birds. These latest designations will help to safeguard the feeding grounds of over one quarter of the UK’s breeding population of little terns and bring the UK’s total number of marine SPAs to 106.

"Like the millions of others watching Blue Planet II, I am only too aware of the importance of protecting our precious marine environment, and the wildlife that relies on healthy and productive seas.

The UK is already a world leader in marine conservation, with over 23 per cent of our waters protected, and these new sites will help to strengthen our Blue Belt and give rare seabirds like the little tern a brighter future."

Extending the Blue Belt gives vital new protection to some of our most precious coastal wildlife. Terns and Manx shearwaters, with their dramatic aerial displays, are a magnificent sight above our seas.

These Special Protection Areas will provide havens for nearly 150,000 birds that breed on our shores in summer or flock there in autumn and winter, helping them to thrive into the future.

The SPAs will afford protection to a range of species, including three species of breeding tern: little tern, Sandwich tern and common tern – all of which are “amber listed” because of factors such as declines in the size or range of their breeding populations. The sites also include the first SPA in the UK for wintering black-throated diver, great northern diver and Eurasian spoonbill, and the first offshore SPA to protect the feeding grounds of Manx shearwater.

The sites form part of the government’s ongoing commitment to create a ‘Blue Belt’ of protected areas around the UK’s coast – with over 23 per cent of UK waters already protected and with more than 300 sites across the UK.