Budget 2015: Another Step on the Road to Prosperity 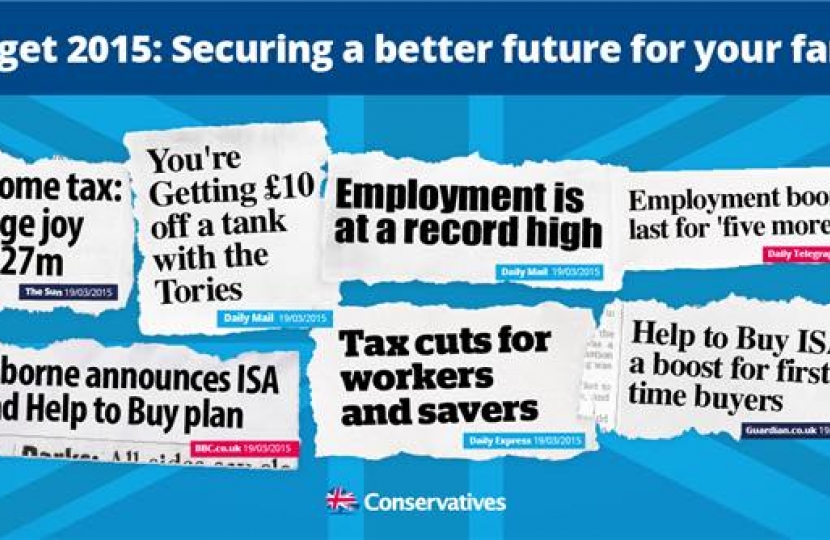 Therese has welcomed today's Budget as another step on the road to prosperity for Suffolk and for Britain.

Therese said: "The Budget will continue the national recovery, cutting taxes, helping first time buyers, aiding farmers, assisting pensioners and supporting savers. Five years ago, Britain was spending and borrowing too much and too many people were out of work. Living standards are now higher than when this Government came into office, with more people in work than ever before."

Therese added: "The big news from today was the rise in the personal allowance – cutting taxes for 27 million people, a tax cut for savers and help for first time buyers. House prices in Suffolk Coastal are some of the highest in the county so the new Help to Buy ISA will be real help for them. The Chancellor has also committed to continuing to freeze fuel duty, £10 off a tank under the Tories, whilst taking a penny off a pint of beer for the third year in a row".

"There was important help for our farmers with measures to extend the period they can average their profits for income tax purposes from 2 to 5 years. There was also very welcome news for our local air ambulance – as £1.7m of banking fines were pledged to purchase a new East of England air ambulance. There was also a doubling of resources to UKTI to support British firms exporting to China, important for the Port of Felixstowe."

Please see below for a summary of the main measures announced today, which I hope you will find helpful:

The Personal Allowance will rise to £10,800 next year and £11,000 the year after, with the benefit also passed on to higher rate tax payers. It means the typical working taxpayer will be over £900 a year better off and 3.7 million people won't pay any tax at all. This is a down payment on our commitment to raise the personal allowance to £12,500.